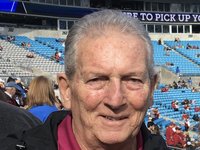 He was born in Philadelphia on November 16, 1939, a son of the late James and Grace (Coughlin) Darragh.

Joe was a lifelong resident of Northeast Philadelphia.  Joe honorably served in the U.S. Army and was a member of the American Legion.  He was an avid golfer and especially enjoyed golfing at Bensalem Country Club.

Joe is the father of Denise (Joseph) Caruso and Christina (David) Yost, brother of Bernard Darragh and Mary Durkin, and grandfather of Emily and Lauren.  He is also survived by his former wife, Suzanne Kline.

Along with his parents, Joe was preceded in death by his siblings, Rita, Nancy and James.

Interment in Washington Crossing National Cemetery will be held privately at a later date.