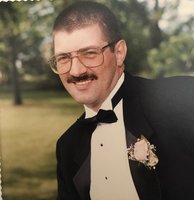 Ron was raised in Conshohocken and later lived in Trenton, NJ.  He had a long career as a Security Guard.  Ron was also proud of his service with the Plymouth Fire Company Fire Police in the 1980's and 1990's.  Ron loved his cats and enjoyed playing solitaire.  He was an avid Philadelphia sports fan.

He is survived by his girlfriend, Denise Schultz-Fogal of Abington; three daughters, Elizabeth (& Christopher) Maslowski of Bridgeport, Shannon Galm of Conshohocken, and Nancy (& Brian) Ackler of Hatboro; two sisters, Kathleen (the late Barlow) McMasters of Conshohocken and Barbara (& Donald) McQuirns of Eagleville; and his brother, Tom (& Toni) Galm of Douglassville.

He is also survived by three grandchildren, Justine Bennich, Kyleigh Ackler, and Finnegan Ackler; as well as many nieces and nephews.

Along with his parents, Ron was preceded in death by his brother, Robert Galm; and two sisters, Patricia Morris and Donna Costa.

Memorial contributions may be made in Ron's name to: The Epilepsy Foundation of Eastern Pennsylvania, https://www.efepa.org/donation/.