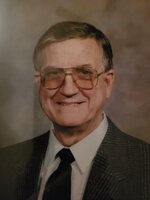 Richard has lived in Plymouth Meeting for over 60 years.   He was born and raised in Skippack, Pa on September 9, 1932, the son of Henry and Lucinda (Fulton) Cassel.

Richard served in the US Army during the Korean War.

He was a Union Carpenter for Carpenter Union Local 1595 for over 30 years.  Richard volunteered with Plymouth Township Little League as a coach with the senior White Sox team. He was an avid Philadelphia Phillies and Philadelphia Eagles fan.  He also enjoyed playing golf and bowled in the Norristown Church League.

He was the husband for 66 years of Jane (Price) Cassel.

Interment will be in St. Mary's Episcopal Churchyard.

Memorial contributions may be made in his memory to: St. Mary's Episcopal Church, 630 East Cathedral Road, Philadelphia, Pa 19128.