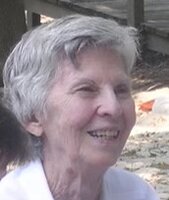 She was born in Phoenixville, PA on September 10, 1927, the daughter of the late Harry Coates and Esther (Montgomery) Peck.

Jean taught generations of children at the Charlestown Playhouse where she was affectionately known as "Miss Jean." She worked there until her retirement after which she continued to volunteer there on a daily basis into her 80’s. She was an active member of the Charlestown Historical Society.  She attended Charlestown United Methodist Church.

She was the wife of the late Elmer Lacy.

She is survived by her adopted daughter, Lisa (& Jeffrey) Turner of Collegeville, PA.  She is also survived by her cousins, Pat Brooks, Esther Kombol and Robert Montgomery.

A celebration of life will be held at a later date.

Memorial contributions may be made in her name to the Charlestown Playhouse.