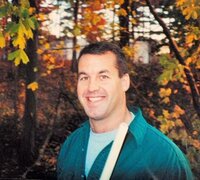 Robert Alan Hellauer, 53, of Linfield, PA died unexpectedly May 12, 2022, in his residence. He was born October 22, 1968 in Fort Devens, Massachusetts, the son of James Carroll and Margaret Ruth (Knowles) Hellauer.

Robert graduated as valedictorian from Valley Regional Highschool in Connecticut, Class of 1986, earning State Runner-up in wrestling in 1986. Following graduation, Robert attended Bucknell University where he received his B.S. in accounting. He was the president and owner of J-Arch Solutions, working as a freelance Business Analyst Consultant with Mosaic Group Partners.

Robert was a volunteer soccer coach and enjoyed taking his children to Phillies and Flyers games. He also greatly adored his two dogs, had a passion for landscaping, loved to golf with friends, and vacationed yearly in Ocean City with his children. Robert will be remembered for his quick wit, charm, and sense of humor.

He was preceded in death by his mother and his brother, Douglas, who passed 2 months prior.

Surviving in addition to his father and stepmother, Carol Hellauer, are his daughter, Cameron Hellauer, his son, Joshua Hellauer, his sister, Christine Hellauer and her husband, Kurt (Ollayos), as well as many nephews, and many friends by whom he was adored.

A service of remembrance will be held Saturday, May 21 at Moore Snear & Ruggiero Funeral Home, 224 W. Main St., Trappe. Visitation will begin at 11 am. The Memorial service will start at 12 pm. All are welcome to attend.