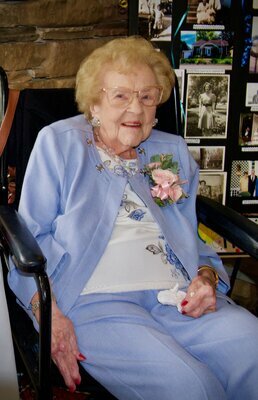 She was born in Neenah, Wisconsin on May 9, 1921, the daughter of the late John and the late Meta (Hintz) Kreutzman.

She grew up in Appleton, Wisconsin and she graduated from Appleton High School in 1939.

After high school and nursing school in Milwaukee the war came along.  So 1944 Eunice joined the U. S. Coast Guard as a SPAR.  She was stationed in Philadelphia, Pa.  In 1946 she was honorably discharged and returned to Wisconsin for a short time.  She was a very proud veteran of World War II.  She returned to Philadelphia to live and work.  During the summer of 1948 she met William W. Reeder at a dance, they were married March 26, 1949.  They first lived in Philadelphia, then Lansdale and in 1954 they moved to Penn Square Village in East Norriton where they lived until 2005.  Eunice and Bill were happily married for 63 years when Bill passed away in 2012.

Eunice has been living in Telford for the last 16 years, Formerly of East Norriton.  While in East Norriton, Eunice worked for the Township as a secretary to several managers.  She started out full time from 1962 to 1986 when she turned 65.  Her retirement was short.  She returned to the township and worked part time until 1997.   Through the years in addition to raising her family and secretarial work, she cut hair for friends, taught piano and was a wonderful seamstress.  She also enjoyed spending time with family and reading.

Along with her husband and parents she was preceded in death by a brother John Kreutzman.

Interment will be in Whitemarsh Memorial Park, Ambler, Pa.

Memorial Contributions may be made in her memory to:  St. John Lutheran Church, 1802 West Skippack Pike, Blue Bell, Pa 19422.

Share Your Memory of
Eunice
Upload Your Memory View All Memories
Be the first to upload a memory!
Share A Memory