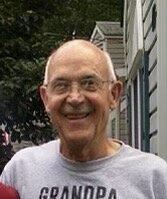 Obituary of Harry A. Conaway

Harry A. Conaway, 80, of Hatboro passed away Saturday, January 29, 2022 at Providence Place, Collegeville.

Born February 13, 1941, in Dallastown, PA, Harry had fond memories of growing up on a farm in Stewartstown, PA. After graduating from Red Lion High School, Harry attended Millersville University to study Mathematics and Physical Science. His education was interrupted when he was drafted to the U.S. Army where he proudly served in Korea. After his service, Harry and Linda got married and after a few years settled in Hatboro, PA where they proudly raised two daughters and a son. Harry had a successful 35 year career with Unisys Corporation which included travels all over the world in various purchasing and procurement roles.

Harry enjoyed golfing, woodworking, reading, and was the master of his grill. He was proud of his children and grandchildren, and had a special bond with friends from college who he considered family. He will be greatly missed.

Services will be private at this time. The family intends to celebrate Harry’s life with a reception to be held later this year in the Hatboro area.

In lieu of flowers, the family requests that Memorial Contributions be made to: the ALS Association; or the Alzheimer's Association