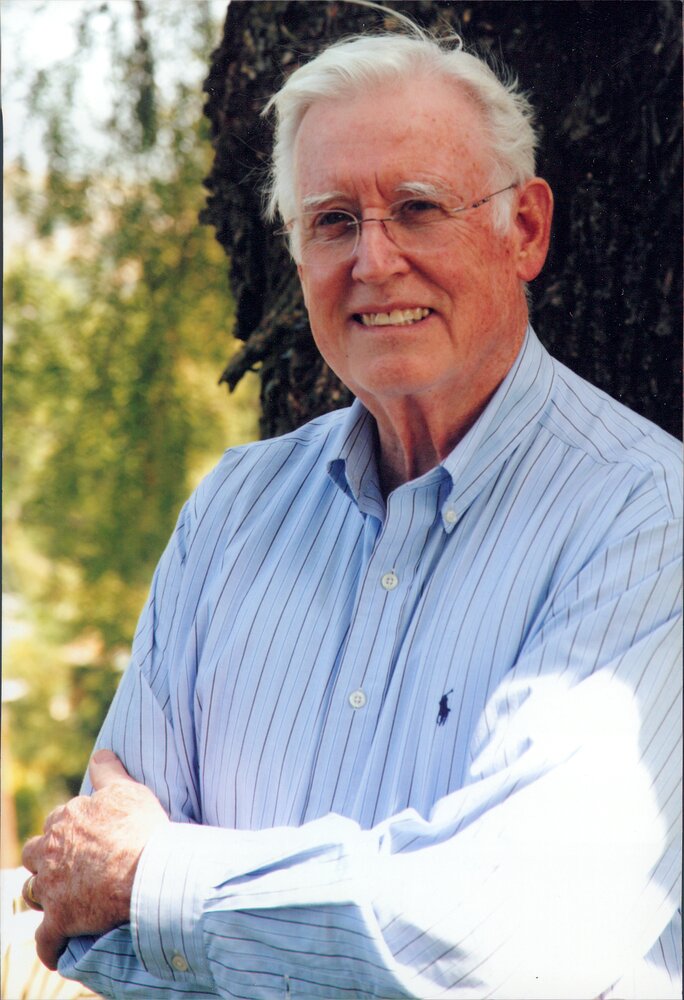 Mr. William Wood Bassett, Jr., of Alamo, CA passed away peacefully on Wednesday, February 23, 2022 at his daughter’s home in Gladwyne, PA. He was 89.

He was born in Peoria, Illinois on December 18, 1932, the son of the late William Wood Bassett, Sr. and the late Martha Bassett (née Robb).

Mr. Bassett graduated from the Spalding Institute in Peoria, IL in 1950. Following graduation, he entered the novitiate of the Trappist Monastery of New Melleray, Iowa. At the age of 17 and just months into the monastic life, the Abbot suggested he was too young and should get a proper college education. Mr. Bassett then entered St. Joseph’s College in Rensselaer, Indiana before transferring to the seminary at The University of St. Mary of the Lake at Mundelein, Illinois.

Following his seminary formation, Mr. Bassett was ordained to the priesthood in 1959 for the Diocese of Peoria. Fr. Bassett served in diocesan assignments before being sent to study Canon Law at the Pontifical Gregorian University in Rome in 1962, coincident with the opening of the Second Vatican Council. During that time, Fr. Bassett worked in the Council during the Second and Third Sessions as facilitator for Senior Archbishops in the Basilica. He then received his J.C.D. from the Gregorian University and returned to Peoria to serve as Vice-Chancellor of the Diocese from 1965 to 1967. In the fall of 1967, he was appointed to the faculty of the School of Canon Law at the Catholic University of America in Washington, D.C. He was granted tenure and rank in the spring of 1973, at which time he also completed a J.D. and joined the bar of the District of Columbia.

During his academic tenure at Catholic University, Mr. Bassett served as editor of The Jurist. Additionally, he was the first American to be invited to join the editorial board of the international academic journal of Roman Catholic theology, Concilium. In 1968, Mr. Bassett edited The Bond of Marriage, an Ecumenical and Interdisciplinary Study. Presently, the William Bassett - Vatican Council II Collection, located in the Special Collections of the University Library at CUA, contains three bound volumes of Second Vatican Council material and a book edited by Mr. Bassett on the appointment of Bishops.

In 1973, Mr. Bassett changed the course of his life and made the decision to enter into Holy Matrimony after receiving proper dispensation by the Church. He married his devoted wife, Jacqueline M. Bassett (née Krueger) on June 23, 1973. In that year, he received a research fellowship from the National Endowment for the Humanities to do research in comparative civil and canon law in medieval history at the Monumenta Germaniae Historica in Munich, Germany.

After his year in Germany, Mr. Bassett joined the law faculty of the University of San Francisco as a visitor in 1974 and was granted full time status as a professor with tenure in 1976. His major areas of teaching law concerned Property Law, Estate Planning, Remedies, Legal History, and the Law of Nonprofit Organizations. He retired to accept Emeritus status in May 2008.

Academically gifted, Mr. Bassett earned the following degrees: B.A., M.A, S.T.L. from the University of Saint Mary of the Lake, Mundelein, Ill. and his J.C.D from the Pontifical Gregorian University in Rome, Italy earning Summa Cum Laude. Mr. Bassett's doctoral dissertation The Determination of Rite (pub. 1967) was the first work by an American to be published by the Analecta Gregoriana in the faculty series of Canon Law. The Analecta Gregoriana is a published series of research that preserves significant contributions from all disciplines within the institutes of the university. He also received his J.D. from the Catholic University of America with honors.

He was a member of the Bar of the District of Columbia (1973), the State of California (1978) and the United States Supreme Court (1984). He served on committees for the California State Catholic Conference and the National Conference of Catholic Bishops. He taught international rule of law courses at Trinity College, Dublin, Ireland and the Charles University, Prague, Czech Republic. Mr. Bassett also took part in the USAID (United States Agency for International Development) program and taught at Udyama and Rutulani Universities in Indonesia, the National University in Ho Chi Minh City, Vietnam, and the University of Kabul, Afghanistan.

In later years, his principal areas of legal practice and publications involved trusts and estate litigation and legal issues involving churches and religious organizations. He wrote six treatises, twelve books, and hundreds of articles in his lifetime. Mr. Bassett’s California Community Property Law is an exploration of the complex area of marital property rights in California, first published in 1988 and updated annually. His treatise Religious Organizations and the Law is a comprehensive analysis of the laws, decisions, statutes, ordinances, and regulations affecting the operation of religious entities first published in 1997 and also updated annually.

Mr. Bassett believed in fighting for the underrepresented and those who were being taken advantage of in litigious circumstances. He was highly sought after for his expert testimony on matters of marital and property law and was often consulted by national and international scholars on matters pertaining to Canon Law and its applications.

To his family, he was a dedicated and loving husband and father. He was at home on the sports field as both cheerleader and coach to his children's teams, by the pool as a lifeguard (never one to shy away from backflipping into the water to join the fun), or at the barbeque preparing the family staple – red meat. He enjoyed family road trips across the Western United States in a wood paneled station wagon and trekking around Europe with his wife and children. However, he also relished in the simplicity of Saturday morning yard work. At the end of the day, he led prayers before family dinner. Every night he was with his family.

Mr. Bassett will be remembered as an intellectual, a consummate professor, a gracious gentleman, an adoring father and husband and a man deeply committed to his Catholic faith.

He is also survived by six grandchildren, Christian, Nathaniel and Henry Mackey of Gladwyne, PA, Jack Bassett of Rhinecliff, NY and Benjamin and Madelyn Bassett of Orinda, CA; sister, Ann Bassett of Loveland, CO; as well as many beloved nieces, nephews and grandnieces and grandnephews.

Along with his parents, Mr. Bassett was preceded in death by his brother, John Bassett of Belleville, IL and sister, Martha Vail of Dallas, TX.

In lieu of flowers, Mr. Bassett’s family would appreciate memorial contributions made in his name to: The Alzheimer’s Association.

Share Your Memory of
William
Upload Your Memory View All Memories
Be the first to upload a memory!
Share A Memory