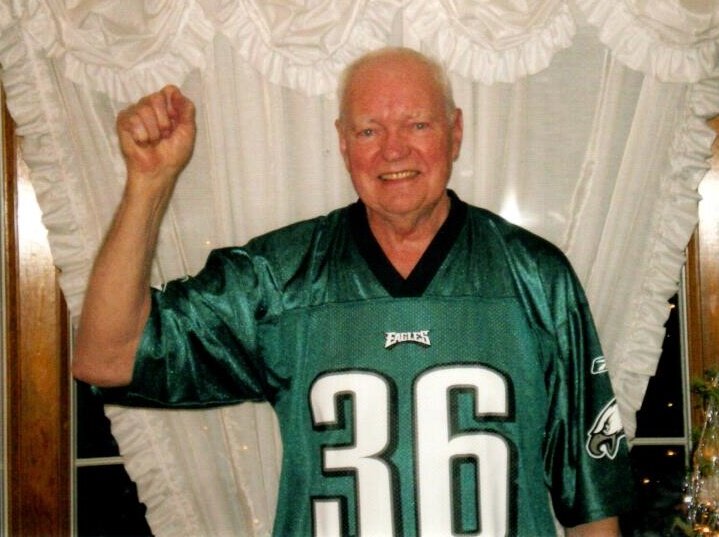 He was born in Conshohocken, Pa on December 16, 1929, the son of the late Patrick and the late Jennie (Orler) Jordan.

Jim was a Sergeant in the Army and served during the Korean War from 1951 through 1953.

He was the husband of the late Estelle M. (Champagne) Jordan, "Hon".  Jim and Hon married May 14,1955 and  celebrated 65 years together before her passing in January 2021.

Jim was an avid sports fan especially the Philadelphia Eagles and Philadelphia 76ers. Thrilled to see "Our Eagles" win the 2018 Super Bowl. He was a big fan of Frank Sinatra; enjoyed carpentry; a very creative man. Proud of his Irish heritage.

He was devoted to his family and his faith. His love for his daughters, son-in-law and his grandchildren was immeasurable. He never had a bad word to say of anyone; never was too tired; never complained. A man of integrity; humble; encouraging and compassionate. He was always hands on with his girls; saying prayers; doing homework; teaching them how to cook and bake. He took us to parks; drive in movies and always listened intently to support and advise. A good provider; sometimes holding down 3 jobs; but he always had time for his family.

He worked as a Supervisor with EJ Lavino and Kaiser Refractory Building Materials.

Whether you met him once or knew him for years; he left a positive and lasting imprint of light. He faced hardships and challenges with perseverance and his faith by which he lived his life by. Becoming a grandfather opened a whole new world for him. He met their every need. Never missed school awards or plays, sporting events or concerts. His quick wit and pranks always kept them in stiches. His sense of humor was a big part of how he is remembered. A true gentleman who appreciated the small things in life. Grateful for everything he had in life and took nothing for granted.

Heartbroken and never ready to say goodbye to this amazing man we call Dad and Pop -Pop. We will cherish an abundance of wonderful memories. He taught us unconditional love; and reminds us of how precious faith and family are. We take comfort in the fact he was at peace and ready to be reunited with his wife and his family, and ready to go home to his Heavenly Father.

He will live in our hearts forever. He is "Our Hero".

We would like to sincerely thank the staff and nurses at Elm Terrace Gardens, and the Ascend hospice team for their compassion and dedication.

Along with his wife and parents he was preceded in death by his siblings Albert Jordan, Catherine Sergio, Johanna Hunt, Patrick Jordan and Joseph Jordan.

His Service and Interment will be private in St. Matthew's Cemetery.

Memorial Contributions may be made in his memory to Visitation B.V.M. RC Church - 196 North Trooper Road, Norristown, PA 19403.

Share Your Memory of
James
Upload Your Memory View All Memories
Be the first to upload a memory!
Share A Memory